Hey! The name's Ash, but you can call me Cinderpeach or Bliss if that's your bag, I'm just your average 20 something whose bored with the samey bland layout and boring shallow drama of the modern internet. I made a neocities page to escape to simpler times, and get lost in everybody's good vibes here! I used to surf the web for fun alot as a kid, it was like a digital playground to me (much like others on here), so seeing home-made colorful sites w/ tons of personality is a comfort for me. I watched my brothers play alot of video games growing up, so pixel art and video game related things have a special place in my heart as well. I also really enjoy theming and design (basically I like studying aesthetics n' stuff) 90s and 2000s websites where nothing but cool and crazy themes, that's what I really love about it.Now, I'm an artist before I'm a coder, which is why the coding on this site, and some of the pages on are a bit wonky sometimes, I'm still trying to understand it heh..heh...oof! I mostly made this site to gawk at the all the other pretty sites on here, anyways. like I said before I'm an artist, I'm hoping one day to make an animation or something, but for right now I'm making just cute dumb art, but I've also been interested in making web graphics which I'll obiviously post here. Other than art and old web, I also enjoy memes (spicy, dead, or dank), sweets, baking, fantasy, dreams, dolls, nostalgia, books, subcultures, niches, aesthetics and video games..if youu wanna hit me up I'm on Discord: Cinderpeach#0149, and Cinderpeach on Twitter, and Cinderpeach16 on Insta. D'oh! I have dyslexia so spelling errors are probably lurking around here somewhere... so BEWARB! 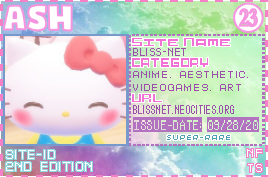